The Calculation of Phase Margin

Negative feedback is ubiquitous, and the discussion on its stability can be found everywhere. For ease of reference, I will put a memo on the equations to calculate the phase margin. 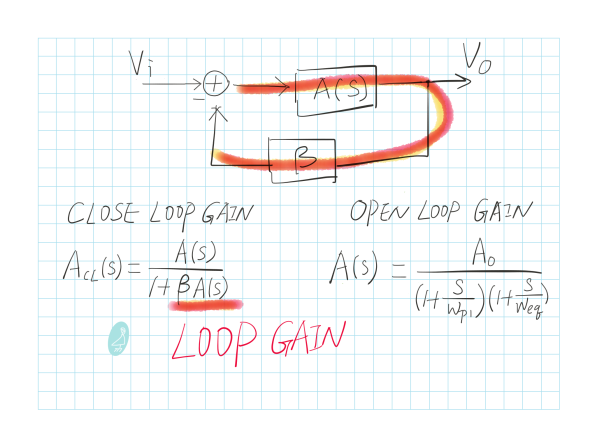 Neglecting higher order terms, it could be simplified to a two-pole equation: one dominant pole and one equivalent non-dominant pole which is approximate to:

The frequency of interest is where the loop gain magnitude is close to unity, denoted as ωt. Normally ωt is much larger than the dominant pole. Hence, βA(s) around ωt can be further simplified to:

Considering the first pole introduces -90° phase shift, the phase of the loop gain at ωt is:

Consequently, the phase margin (PM) is calculated by adding 180° to the phase of the loop gain and it is written as:

It can be seen that the phase margin is determined by the relative position between the equivalent non-dominant pole and the unity loop gain bandwidth.

3 Responses to The Calculation of Phase Margin