ADC Performance B: INL vs. THD

In the previous post, I’ve looked at the relation between DNL and SNR. In DNL plot, where the variation of the nonlinearity error just looks like noise, so it’s easy to imagine that the SNR will be degraded due to the DNL (noise level is increased).

Now let’s think of an INL plot. Ideally, it’s the converter’s overall transfer function, which is straight (linear). However, in practice, it deviates from the perfectly straight transfer function (imagine a bending line). We know that as long as the transfer function is not straight, there should exist harmonic distortions. Hence, there’s relation between INL and THD. In this post, I will share some information about it. 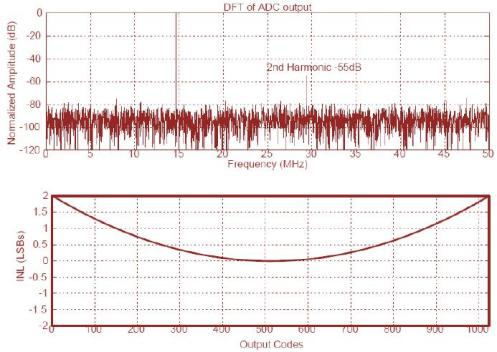 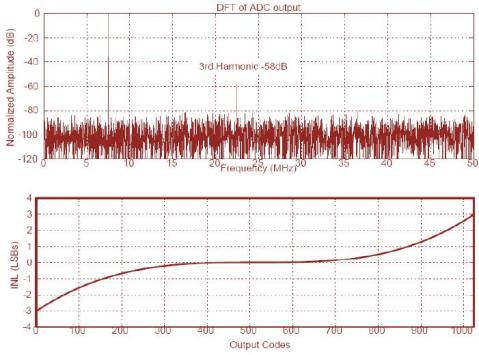 Secondly, a glance at a curve of THD vs. input frequency from datasheet, and then estimate the INL [REF 3] .

The INL specification for this device applies only with low frequency inputs, the very left hand side of the graph. As the frequency of the input signal increases, the output codes will deviate more and more from the desired ideal output code, and the INL worsens.

Then, if the converter is used to digitize a signal which can slew at an equivalent rate to that of a 10kHz signal, then the THD of the converter will be roughly -86dB. This represents an INL error of +/- 1.6LSB. The INL error has increased ±1.3 LSB.

Note that this calculation is a first-order approximation.

6 Responses to ADC Performance B: INL vs. THD